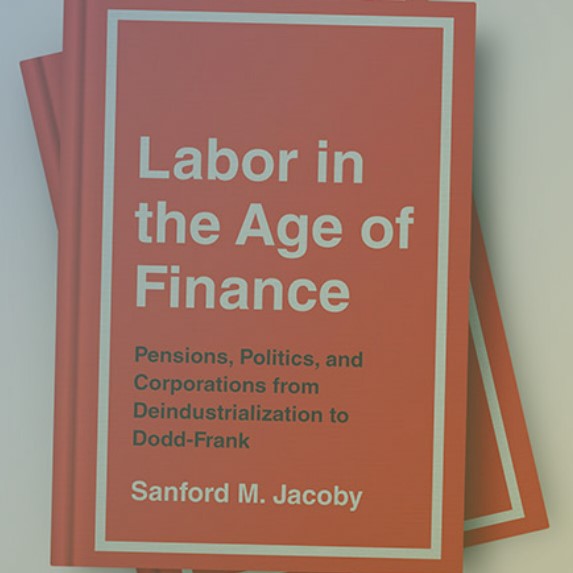 Previous item "Behind the News with Doug...

For a link to the Original Page: click here

There’s no avoiding the weakness of organized labor in the U.S. Membership in private-sector unions barely exceeds a meager 6% (the number is considerably higher for those representing state and local government workers), even though public support is strong. The most promising organizing effort in years, a campaign to unionize Amazon warehouse workers in Alabama, was defeated.

Labor’s long slide began in the 1970s and ’80s. At the time, a new generation of leaders — faced with aggressive anti-union tactics by employers and the threat of jobs moving overseas or to the nonunion South — tried to counter the decline with intensified organizing and a novel focus on the boardroom, not just the bargaining table.

The efforts are described in a new book, Labor in the Age of Finance: Pensions, Politics, and Corporations from Deindustrialization to Dodd-Frank (Princeton University Press, 2021). In the book, UCLA Anderson’s Sanford M. Jacoby explores how the labor movement tapped the financial clout of its hefty pension plans in an attempt to support its organizing efforts. “Capital was harnessed to restore labor’s strength,” he writes. “With their pension funds, unions found a source of power outside the labor market to augment their power within it.”

The results of labor’s “financial turn” were at best mixed. Unions demonstrated that the century-old U.S. labor movement could adapt to changing economic circumstances. A few unions, such as the Service Employees International Union, or SEIU, leveraged its shareholder campaigns to grow membership. Pension plans and other institutional investors gained some increased influence over corporate governance.

The claims of shareholder primacy — that shareholders owned the corporation and that their interests should be paramount — led to a wealth transfer from labor to capital. For the most part, however, restraining shareholders was not on labor’s agenda, other than admonitions to invest for the long term. Unions were slow to criticize mounting payouts to shareholders.

But overall, the efforts did little to halt organized labor’s decline. “By exercising their shareholder rights,” Jacoby writes, “union investors affected the governance of the nation’s largest corporations even as labor faded from within them.”

Unions, frequently in concert with other activist shareholders, had attempted to wield their pension stock holdings to elect friendly board members or defeat unfriendly ones and have greater say in nominating directors and setting CEO pay. The main goal was the signing up of new members, but, Jacoby says, unions also sought to curb rising pay inequality and make publicly traded companies “more accountable, transparent, and public-minded.”

These efforts rode two waves then sweeping the business world. One was a shareholder-rights movement claiming that corporate owners — those who held stock — took precedence over other stakeholders, including executives, customers and employees. The other was “financialization,” marked by the increased importance of markets and financial institutions within the global economy.

At the front of the campaign were a group of multiemployer pension plans, known as Taft-Hartleys, that cover employees of multiple unionized companies and public-sector plans for state and local government employees. The well-known California Public Employees’ Retirement System, or CalPERS, is the largest public-sector fund and was among the most active in labor’s financial turn.

CalPERS proved an important ally for private-sector unions. In the early 2000s, Jacoby writes, all 13 CalPERS trustees were either Democratic elected officials or had a union background. In a dispute between several California supermarket chains and their unionized employees, CalPERS — whose president was a member of the United Commercial Food Workers Union — called for the resignation of the Safeway CEO who was leading the stores’ efforts to reduce labor costs.

(After a four-month strike, the union agreed to a two-tier contract that protected existing employees while lowering salaries and trimming benefits for new hires. Shortly after, Republican Arnold Schwarzenegger replaced Democrat Gray Davis as governor and forced out the CalPERS president.)

CalPERS was a leader in the broader push for elevating shareholder concerns in the running of publicly traded companies. The plan, along with large institutional investors, adopted codes of corporate governance — what Jacoby calls “the cookbook” — that opposed anti-takeover measures like poison pills, greater independence of boards from CEOs and supported stock-based pay for executives. Some unions also proposed their own codes that recommended rewarding executives if their companies provided “a supportive work environment” and lengthening of the duration of the CEO’s performance measures.

Executive compensation — “labor’s signature issue,” Jacoby writes — revealed the tensions between unions and other activist shareholders, including CalPERS. Unions wanted to put a spotlight on the growing chasm between the salaries of top executives and the wages of rank-and-file workers as a way to challenge the claim that companies cared about their employees. They also sought regulations to remedy problems such as the backdating of stock options. They succeeded on several fronts but without any noticeable effect on the pay gap between CEOs and front-line workers.

Ours is a meaner era. Its hallmarks are staggering inequality and flat incomes for the vast majority. Improving the situation will require a host of changes: to shareholder capitalism, the tax system, social spending and more. In the past, organized labor raised living standards and shored up democracy. It can happen again.

Jacoby finds that stock buybacks — another practice that benefited CEOs and appealed to shareholder activists — contributed to a massive shift in corporate wealth. He cites a study that found corporations created $34 trillion of equity between 1989 and 2017, nearly half of which represented a transfer from workers to shareholders. Ironically, by embracing the shareholder cookbook, union investors hastened the reallocation.

Labor’s finance-based tactics did contribute to some successes, including the SEIU’s widely publicized “Justice for Janitors” campaign. Faced with the challenge of organizing office-cleaning workers scattered over a city and working for dozens of small subcontractors, the union targeted building owners, which included publicly traded real estate investment trusts and, often, the large pension plans.

The union called on pension plans to adopt “responsible contractor” policies, requiring cleaning contractors to provide fair wages, health insurance and pensions. CalPERS and other public pension plans agreed to apply the policy where they were the majority owners of the building.

In the last part of the book, the scene shifts to the political realm, where in the wake of the Enron and other financial scandals and the 2008 crash, union leaders and pension funds sought to influence both the Troubled Asset Relief Program, or TARP, and Dodd-Frank legislation to stiffen regulation of the financial industry. The efforts managed to get many of the cookbook’s key provisions incorporated into Dodd-Frank, such as a say on pay and proxy access, but parts of the law have been tied up in regulatory limbo.

Since the crash, which led to the loss of 1.2 million private-sector union members between 2008 and 2012, unions have scaled back their shareholder activism and their corporate campaigns. In 2019, a smaller share of private-sector employees belonged to unions than in 1929. “Unions were not where they hoped to be when they started down the road to renewal,” Jacoby writes.

Still, he concludes, “The attempt bolstered the labor movement and brought a measure of corporate accountability.”

What unions did manage to accomplish required “the messy compromises of realpolitik,” he writes. “The trade-offs would have been less problematic had unions been stronger, pension funds better funded and fiduciary rules more flexible.”